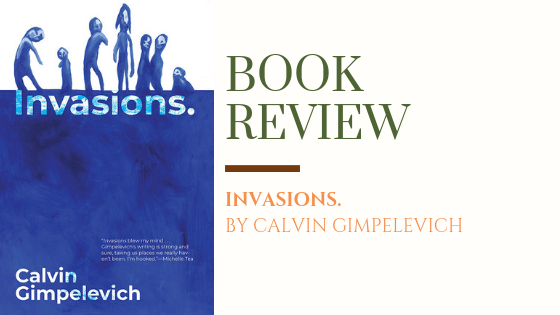 Invasions is Calvin Gimpelevich’s debut short fiction collection that draws together 15 stories which interrogate gender, sexuality, bodies, relationships, boundaries and borders. Although Gimpelevich’s work has previously been featured in other places before, such as Meanwhile, Elsewhere: Science Fiction and Fantasy from Transgender Writers, Electric Literature and Hashtag Queer, I had not had the pleasure of coming across his writing until now. I wasn’t entirely sure what to expect from a new-to-me writer but I was very impressed both by Gimpelevich’s writing and the collection as a whole.

With 15 stories there’s a lot on offer to chew through, digest and experience. Opening with ‘Velcro’, Gimpelevich doesn’t hold back from tearing readers from their places of comfort and throwing them deep into the often uncomfortable and always complex realm of bodily experiences. Just as you’re becoming acclimatized to this radical new space which the queer body occupies, Gimpelevich serves us ‘Rent, Don’t Sell‘ a visceral, compelling, and raw portrayal of bodily alienation, economy, and boundaries. In one of the standout stories of the collection ‘Rent, Don’t Sell‘ embodies the experiences of ex-Marine Nok, who lost her arm in service and now works at a true gym of the future where clients pay to have Nok swapped into their bodies where she pushes their bodies to the absolute limits in physically exhausting work outs before returning to her own. Alongside Nok, Gimpelevich also introduces us to her sister, who rents her body out for others to enjoy, and her trans girlfriend, who was body-swapped with a trans man in the hopes of achieving more bodily congruence but who deeply regrets her decision. A few stories on we get hit by the horrifying ‘Revenant‘ told from the perspective of a child whose best friend’s older sister, Cass, went missing, only to be dragged sometime later (still “alive”) from a nearby river after our protagonist begins to experience a bodily-connection with Cass through her clothes. The penultimate story, ‘You Wouldn’t Have Known‘, was another striking story which stands out for me and one which provides a pervasive look into a private sexual realignment clinic through the perspective of a young trans man who is waiting to have surgery alongside numerous trans women, young and old, and their relatives.

Invasions is not a comfortable book but it is an essential book. It provokes, it challenges, it questions. It’s a book that takes everything you might think about bodies, gender, relationships, borders and boundaries, shakes them up, and leaves them scattered all over the floor. As a trans person, I see countless books written to comfort cis audiences which provide a very generic wash of some kind of “trans experience” but not Invasions. It fundamentally disturbs your assumptions, your ideologies, and your identity in an a literary approach that is refreshingly honest.

There are parts of this collection that left me feeling uncomfortable in a not good way, for example in ‘Transmogrification’ which puts the mind of a six-year-old girl in the body of a grown man and throws her out into the very adult world and the ending of ‘Rent, Don’t Sell’ in which Nok and her girlfriend forcibly kidnap the trans man who she body-swapped with and puts them back into their original bodies – something which set Natasha back onto her path of happiness but which left me feeling sick to my stomach at what that would be like for the trans man. These are just two small examples of things I personally found difficult to read, but otherwise don’t detract from the overall outstanding nature of Invasions as a whole.

I want to thank Instar books for sending me an ARC of Invasions and leading me to discover something refreshingly new. This is a fantastic debut collection from Gimpelevich, a fantastic writer who I’m sure will continue to produce work in the future that breaks all kinds of boundaries. I look forward to reading any future work and would encourage you all to check out Invasions which is now available to buy!